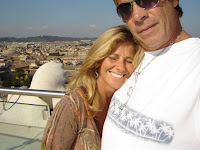 There are some things that just must be experienced when you visit Rome. Last year we went to the Vatican Museum and were given a wonderful tour by a little lady who we dubbed ‘Yoda’s sister’ so we really had covered that well. This year, the most important museum on my agenda was the complex on the Capitoline hill. With this goal in mind we set out and caught the bus just on the other side of Piazza Zama that took us to the base of the Capitoline hill. Last year we had not climbed all of those steps up the left side to the church which sits in the temple to Jupiter Maximus but we were fresh and so I led Donna up what must number in the thousands of steps. Bummer, when we got all of the way up, the place was locked up solid and there was apparently no connection to Michelangelo’s square in the center of the Capitoline. 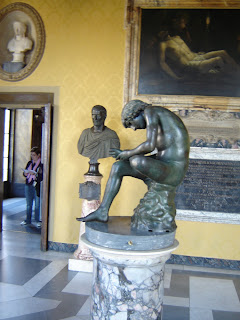 We did discover an open gate to the left that led around to the back side of the Monument to Vittorio Emmanuelle (we called it the wedding cake when we were kids). Since the last time that I had lived in Rome they have added a very cool feature to this monument. I had read about it in our guide book. They put an elevator on the back side of it and this elevator takes people to the roof of the darn thing, right up there with the two chariot winged victory statues. For 10€ each we went up there and I have to say, from there you get the most incredible perspective of Rome that there ever was. This is the true, new ‘E’ ticket ride in Rome! If you come, and you only have a day, I strongly recommend going to the top of the monument to Vittorio Emmanuelle which is also Rome’s tomb of the Unknown Soldier. Apart from the two statues which sit higher than the central roof, you basically get an unobstructed 360 degree view of all of Rome and you are standing above every other building for many miles around. I’m pretty sure we were higher up than the top of the Janicolo which used to be the prime viewing place in the City. 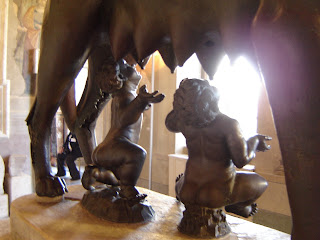 There are some high power binocular/ telescopes up there as well. With these you can count the nose hairs on a face miles away. These were very powerful. I took photos all the way around. At home I have a program that puts together photos into a panorama; we’ll see how that comes out. Eventually, we went back down and it turns out that if you continue around the back toward the Corso Imperiale, you can get over to the Capitoline from there. We loved the two museums on the Capitoline, they were truly inspiring. I guess that for the most part, I am into statues, and that is what these museums were dominantly about. Unfortunately, the Medusa head by Bernini was on loan to Capua, co we missed that but I went mostly to see the Dying Gaul because of the book Desmond did by the same name. A tunnel connects one museum to the other and crosses under the piazza so one ticket does both museums. 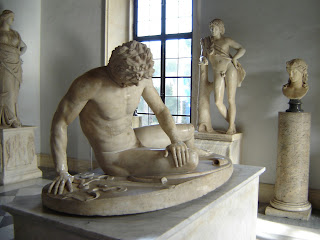 Finishing there we lazed under some Stone Pines and took in the view of the Forum. Looking down, on the side of the wedding cake we noticed that it was there that the ‘Tribute to Luciano Pavarotti’ was being exhibited, plus there was an Exhibit of Picasso’s work in the same building. We walked down, the Pavarotti exhibit was very interesting and incredibly moving and powerful. They had set up projectors that used a whole huge wall as a screen. On both sides were cycling black and white photos of Luciano, 16 at a time. In the center was floor to ceiling video of his more famous performances including one done in Sarajevo with a symphony orchestra, U2 and Bono. The side walls had grids of dozens of plasma monitors with video of other events with the great man. They said that they had 6 million meters of taped video of Pavarotti. That seems like a lot to me. The stereo system was excellent and the music was unfathomably powerful. Naturally they had other paraphernalia as well. A whole wall of all of the records and CDs of his music, many of the costumes that he had used in the operas he had performed in, etc., ect. I really enjoyed this exhibit; I only wish that I had actually seen him perform in real life. Next we went upstairs to see Picasso, he wasn’t there but there was a sizable amount of his work. I’m ashamed to say, I don’t really like most of what he did. The pencil drawings and the sculptures talked to me more than the paintings but I guess that my true love is rooted in antiquity. 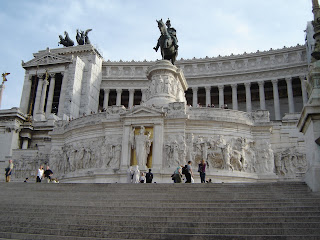 Exiting the exhibitions we wandered around to the front and climbed the stairs in the front of Vittorio Emmanuelle enough to see the tomb of the Unknown Soldier. They had a special cop on the steps whose job it was to blow his whistle and prevent anyone from sitting on any one of all of those steps. He explained that this is a military monument and you must not sit down out of respect for the dead soldiers. Five in the evening, tired and in need of a recharge, we headed off to the Ghetto. Most of it is closed to traffic so it is much more pleasant than it used to be. It hasn’t come into its own yet as a tourist destination but I can see that very soon it will be full of restaurants with tourist eating on the streets. We sat down at a bar to have a beer. After a while we noticed that a group of well dressed elderly women were starting to accumulate on the bench across the street from us. Four of them were sitting side by side on one bench. Then three men come over to our side and sit down at the outdoor table next to ours and start talking but don’t purchase anything. As time goes by, more women arrive; they bring their own folding chairs and set up around the bench with the original four women. For a while it becomes multi generational as a young girl comes to hang out with her grandmother. Meanwhile at the table next to us, there were more and more men joining this group. We must have sat down at the tables that they habitually occupy, they didn’t ask us to move or to leave but we started feeling surrounded. Now there were over ten men. Some were sitting next to and behind Donna and some next to and behind me. We thought that it was getting to pretty comical. All of the men grouped next to us and not one of them has purchased a thing from this bar. All the while, those ladies were over there on the other side, serious and watching the men on our side. Finishing our beer, we decided that it was time to move on. We abandoned our spot and the men spread out into our chairs.
Posted by Bryan Morse at 4:20 PM