F.Y.I. This is Italy, on Mondays; everything of historical importance is closed.


We returned the car to the airport, by now I am getting over getting lost all of the time. We actually navigated to the airport with little to do. I only made two wrong turns along the way but immediately realized that I had tried to apply logic to the situation and was able to rectify my naiveté and apply counter logic to get me back on the correct course. Dropping off the car was painless and we proceeded to the train station at the airport to catch the train to Termi which is the main station in Rome. We arrived at the station, followed the throngs out the front and began our great walking loop of what I consider the must see at least once while in Rome spots.

First to Piazza della Republica to see the fountain (Rome for me is and always has been all about its fountains). On the piazza is the church converted from part of the baths of Diocletian called Santa Maria degli Angeli e’ gli Martiri (Santa Maria of the Angles and the Martyrs) which was worked on by Michelangelo and many others. It was pretty spectacular and definitely worth a look. From there we went on to Piazza Barberini (for the fountain) but the flow was reduced from where it should be. On to the Spanish Steps. We approached from above and bummer the church was closed but what a view of the City. Down the steps and past the boat fountain, across to Via Condoti which occasioned an obligatory visit into one of its exclusive stores by Donna who eventually emerged with a package in her hand and a smile on her face. Down a side street called Via Mario Dei Fiori kept us off the larger congested roads and soon we emerged onto the piazza that houses the Fontana di Trevi (another fountain). The fountain was being repaired, no water flowed and a crane was parked to the side. Naturally, no one was working on the fountain. From there down the alleys of Via delle Murate toward the Pantheon. I didn’t go look at the fountain in front of the Panteon, the building is so overwhelming that all else is lost. We did however go to the Tasso D’Oro for a coffee while in the neighborhood. Next, on to Piazza Navona. Mom, the church of the French something was closed, I will try to get back there sometime. Wasn’t there a statue of the Madonna with the dying Christ (like the pieta) on that same street behind Piazza Navona somewhere? I seem to remember old ladies touching the feet when I was a kid. Anyone know where that was? 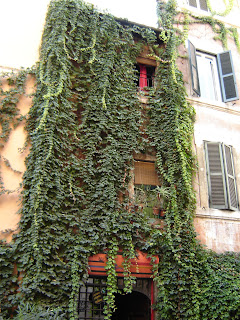 In Piazza Navona they are still working on the main fountain a year and a half later if you can believe that. The place was happening as usual. Artists selling their paintings and the cafes and restaurants full of people. We stopped and rested and paid 14€ for two coffees ($21.00) but it was worth it. From there we went past San Andrea della Valle into Largo del Pallaro to see the old house. Donna values the historical importance of this site as well since it is built on top of the theatre of Pompeii (yes, that same Pompeii guy that I mentioned before) where Julius Caesar was assassinated. We went through the metal gates and stopped at that restaurant (whose name escapes me) and asked to be allowed into their basement. There we stood in part of the ruins of the theatre. It was heavy with history and very powerful for both of us. Into the Campo dei Fiori, the market was being disassembled. And on to the Villa Farnese, we sat and rested on one of the fountains. I dragged Donna down the alley to Via Gulia so that I could look at that wall fountain of the face again. We got to see into the back garden of palazzo Farnese from the Via Gulia side and then we went down Via Gulia toward the Ghetto, the Theatro Marcellus and the bus stop to get us back home for the evening. Almost every one of these places had been visited last time we came but I feel the need to reconnect each time I return. By the way, we are already planning when to come next year. Perhaps in June on the way to Greece?
Posted by Bryan Morse at 5:02 AM