Day Four, Pompeii and the Pope 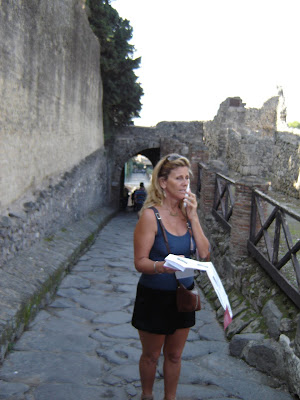 Next morning was a lazy start, our goal for the day was to visit Pompeii. The distance was not far so we were not in a hurry. We had a relaxed breakfast out on the porch and Donna brought her pastels and did a drawing of the scenery while we ate. We packed, brought our suitcases down to the lobby and checked out. This time there was a strong guy standing around in the lobby to carry the bags down to the car. I was happy to see that and I know why he must hide when it comes time to carry luggage up those stairs. So he just tied all of our bags together with a rope, hoisted the lot over his shoulder and off he went down those stairs. We followed and when we arrived at the car, the guys there extracted the Micra and then gave us a bill for 42.50€ (around $60.00) for two nights parking. This really got Donna going, she was not a happy camper, she was even moved to climb all of those stairs to go talk to that lady at the hotel. The lady at the hotel said that the small print on their web site said that parking was not included so tuff shit. We intend to crucify this place on the web for being so deceptive that there was no mention at all of a parking fee until the second we were ready to leave (after we had paid our hotel bill). Anyway, now you know why it was that all of those well to do Italians were parking their cars kilometers down the main highway from the entrance to the town to save what amounts to a lot more than a few bucks to park their cars for free. 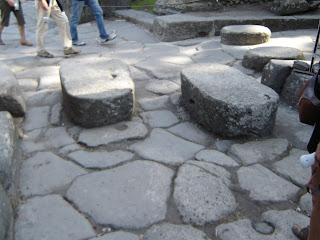 Down we went into the town and back up again. Turn left and shortly we were stopped by a police traffic lady on duty at this corner of the highway that was so tight that she needed to stop the northbound traffic to allow each southbound bus to get around the corner without killing anyone. We had seen four or five other traffic policemen standing around at various corners along the road the previous day in obscure locations. Watching this operation gave me new appreciation of just how narrow, sinuous and dangerous this road really is. Amazingly, we returned to the freeway without incident and without getting lost. Shortly later we arrived at the exit to Pompeii. The exit brought us off to the left of the freeway or to the west of the freeway, being a seasoned traveler by now and having cast off the last vestiges of my macho ego over the past few days, I immediately stopped to ask the Carabinieri who were standing on the center divider of the freeway exit for directions to old Pompeii. He said that the Pope was on his way into town and that he wasn’t sure that I would be allowed to go to the digs (Scavi) but I was welcome to try. Just go right, follow a while, go right again, up over some sort of rise, down the other side and go right again, no problem. So we take off, the place is crawling with Carabinieri. They are following us on motor cycles and going the other way too. There are lots of signs to the Scavi Pompeii and I only need to stop and ask directions one more time. I do however accidently take this right at a Y in the road that leads me into the parking lot of some mega market. Once in, just try to get out. We did eventually leave but it was a quite convoluted route designed to accommodate a couple of hundred people stuck in a traffic jam. Arriving outside of the Scavi, there was a restaurant that only wanted to charge us 5€ to park. It had only cost us 2.5€ to park at Ostia Antica but after what we had just paid in Positano that morning, this seemed pretty cheap. The Carabinieri were arriving, more and more every minute. We had trepidation that the Pope would arrive and they would close down Pompeii. Pretty soon there were two SWAT vans (the Italian version) and Carabinieri cars with machine guns all over the place. Anyway, we went on in, we figured once we were in, no problem, we would just hang out with the Pope inside the Scavi di Pompeii. 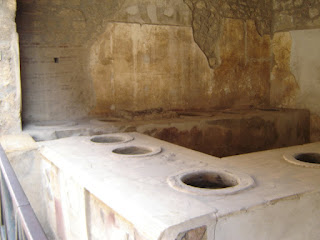 The Scavi di Pompeii are huge! This was a major city; the ruins go on for kilometers in all directions. It was very interesting to check it out but they should run bus tours through it. Donna discovered that the ancient city had fast food stands on all the main streets, turns out that fast food was not invented in the States. No point in going into any details except to note that Pompeiius Magnus came from Pompeii (for those of you that saw the Rome series on HBO) and that the city was conquered and brought into the Roman sphere of influence by Sulla who is everyone’s hero that read the Colline McCollough Series that started with the ‘First Man in Rome’ book. The guide book said that you could still see the dents made in the arches at the city gates caused by Sulla’s men who threw rocks at the walls as they stormed the city. Donna, being a newly anointed scholar of the late Roman Republic was thrilled by these observations and in being able to stand where these great men had also stood. Actually, sharing history with the ‘Greats’ and standing where they stood is a pretty powerful experience. I recommend to anyone that they will get so much more out of Italy if they study its history first. I included a photo of the pedestrian bumps that cross all of the streets. These were so that the pedestrians wouldn’t have to step into the open sewers that the streets represented. As time went on, we ended up at the opposite end of the City from the entrance. Now there was a helicopter hovering in the air near the other end of the city. It remained hovering for around an hour, in a way unfortunate because it went a long way toward breaking the harmony of the experience of catharting with Pompeii . 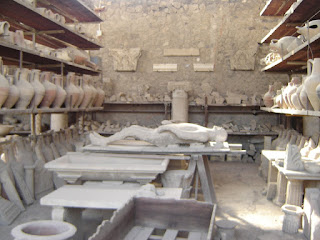 We were bushed; we stumbled out of Pompeii and down to the car. Ate at the restaurant and were soon on our way to Rome. Never did get to see the Pope, turns out he went to the new town of Pompeii and they just had extra Carabinieri hanging around for the fun of it. Boy did we get lost trying to get back to Rome, lucky we didn’t end up in Florence. Every highway in Italy seems to be called A1. Well one part of A1 bypasses Rome completely and goes on for 30 km without any exits. We missed the first exit to the ring road around Rome because it was a great deal less than clear. We finally got off of A1 way north of the ring road around Rome and returned south along a highway that paralleled via Salaria back to the ring road. By then we had analyzed the map and proceeded to go the wrong way on the ring road. We were headed counter clockwise toward Fumicino and would need to go three quarters of the circumference to get to where we wanted to exit. We exited, went right and ended up again going the wrong way. I decided to apply Roman logic to the situation. Whatever seems logical, ignore it and go with the counter intuitive solution to the problem. That worked fantastically and I got us out of this ridiculous clover leaf build under the freeway that had led us on a merry goose chase trying to follow logic since there really were no signs anywhere to tell us which way to go. We got back to Beatrice and Renzo’s house exhausted and greatly relieved. All I could think about was that tomorrow morning I was going to return that car in one piece to the rental place at the airport and I would not be getting lost again on this trip. 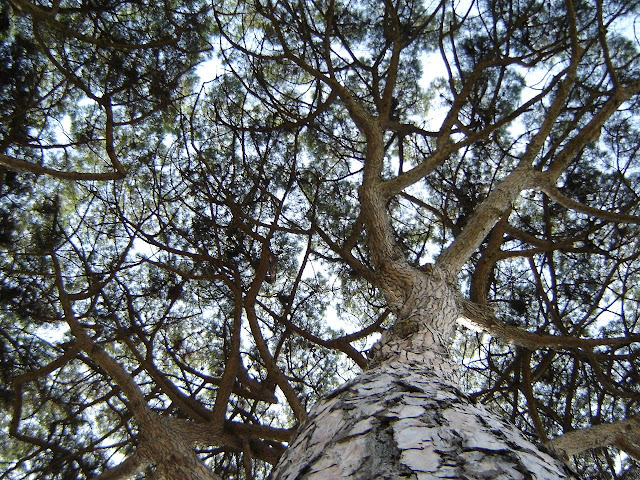 Posted by Bryan Morse at 7:47 AM No comments: