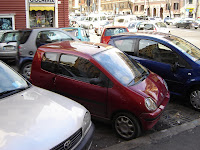 Monday February 12: We arrived early that morning and were met at the airport by Beatrice in her extremely compact Fiat Cinquecento (500cc engine). It was so compact that it was not immediately apparent if we would be able to fit the three of us and our luggage into that little car. Poor Donna was crammed into the rear seat with the luggage. She was almost buried back there.

After no sleep for almost 24 hours, we showered and got instructions from our hostess on which bus to take to get to the old heart of town and then we took off. We left the apartment and began a search for a place to buy a bus ticket (1 Euro). Supposedly the Tabacherias (Tobacco stores) sold them but they were all closed. I went up to a newspaper stand and here the phrases from that infernal tape held me in good stead. I asked in prefect Italian where I could buy a ticket for the Auto Bus and was told that the Bar across the street sold them. Turns out the bus stop was there as well so we were off to a good start.
So anyway, this bus went everywhere, but the important thing was that the driver assured me it went to the center of town including Piazza Venezia and Largo Argentina. We drove past the Terme di Caracalla (Baths of Caracalla) and many other familiar markers and get this, right past my old bus stop at the Teatro di Marcello (Theatre of Marcellus). Past the Capitoline into Piazza Venezia and over to Largo Argentina where we disembarked. 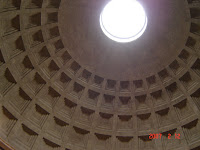 Off to the Pantheon because they close the doors at dark and I didn't want to miss the interior after having built my own undersized replica this past year. Well, it was great to pass through those amazing doors and into the Rotunda but half of the interior was under restoration and I forgot to pay homage to Raphael. I may need to return because we also bypassed the Tazza D'Oro. Seems like the City is being overtaken by foreigners. It was drizzling and the Indians (from India) had the monopoly on selling umbrellas on the streets of Rome. This guy wanted 5 Euro for the compact model but Donna wanted the large (made for two and a half model) with a rainbow of colors on it. He wanted fifteen for it so I offered him five. He said "no, no" so I offered six. He wasn’t very flexible and Donna didn’t understand that the streets of Italy are just like Mexico co so we agreed on 11 Euro but Donna only gave him 10 Euro and 95 cents. Turns out Rome looks good walking under a rainbow of colors and it did help keep us dry too.
Well, Piazza Navona was only a few blocks over so off we went and entered to view Bernini's fountain of the four rivers but alas, it too is being restored. There were windows to look in but the water wasn't flowing. The other two fountains were in glory so we walked around the piazza as I reminisced about the anti Vietnam war protests of my youth, drug deals and other goings on of Piazza Navona many decades ago. 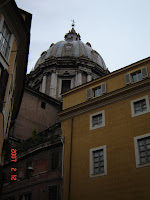 Naturally from there it was only a few blocks to San Andrea Della Valle and our old apartment so we crossed the Corso Vittorio Emanuele and walked into our old piazza, Largo Del Pallaro. The apartment is still there but the windows and the patio door were shuttered as if the owners are gone right now. We took pictures and I reminisced with Donna about the wild times in that house and the dining table with the painting of the dome across the street. Also New Year's Eve when everything went out the window and the hand coffee grinder that we found one new year's morning before the street cleaners put everything back to normal. By the way, we saw the street cleaners and they have those same old brooms but now the twigs they used to sweep with are made of plastic. Oh well.
I showed the Donna the shape of the building and explained that it was built on top of the stage of the theatre of Pompeii and that Julius Caesar was assassinated there. I forgot to tell her that Leonardo (my brother) is the reincarnated Caesar, but I'll tell her later.


Into Campo dei Fiori. The market was down and the last of the booths were rolling up and moving out. Fresh produce all over the cobble stones and the old movie theatre was still there after all of these decades. So was Giordano Bruno and the ristornate 'la Carbonara'. I have introduced Donna to the spaghetti dish named after the place so now she knows it's origin. Donna is going to have a skewed impression of the history and sites of Rome, but she doesn't care if I am making it up as I go because the narrative is entertaining. Over to Piazza Farnese for a look-see and on down heading towards the Ghetto and our other old apartment.
By the way, one new thing. Little steel and glass boxes all over the place with a Carabinieri (Italian military police) in it. Makes you feel a lot safer but it's sad that they had to do it. 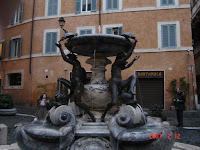 Not much changed there but now its the museum of Jewishness in Rome or something like that. The basement of the synagogue is a museum and since Donna is sort of Jewish, I wanted her to see the inside of the temple. To do this we had to pay six Euro each and wait for the tour. Turns out that there is another temple under the synagogue. I learned more yesterday about Jews in Rome than I ever had before so I guess that it was worth it. As Dad had promised, Limentani's (an incredible wine glass and kitchen store) was still there but wow have they come up in the world. The old doors to the street are still there but inside of that are new glass partitions and everything is in glass display boxes. No problem if you want to pay 20-30 Euro for a wine glass and they have the best stuff there but I was disappointed because the place seems to have shrunk by over 50%. My recollection of the place was sort of a catacomb of glass wear. The place is still large but it no longer encompasses an acre of basement space. Oh well, things do change in thirty years. About this time I realized that I hadn't actually seen one single bread store in Rome. Off I went down the street to the old bread store in the Ghetto, it to was gone. The Ghetto pastry store was still there and we peeked in, then off to the Turtle fountain in the Piazza Mattei. I told Donna about the love lost and the fountain's coming about but perhaps that too is made up, though it does make a good story.
By now it was getting dark and we were thirsty so the goal was Birreria Peroni but first back to Largo Argentina to check out Il Delfino and get a Suppli! Remember mom that I wanted you to make them at Christmas but we never got around to it, anyway, One Track Mind- got to have a Suppli. The Delfino looked smaller to me, guess I grew up since then. It also wasn't as appealing so we got two Suppli to go and headed off towards Piazza Venetia.

Stopped along the way at a tourist shop that had that apron that I wore one Christmas day at Dad's house some years ago. The Michelangelo David from the neck down imprinted on it. I remember that it embarrassed me for a minute or two when I put it on but I soon got over it and it does have such a great shock factor! Guess what I'll be wearing next time I have a dinner party.

We turned down the right street heading for Birreria Peroni but something was off and I didn't see it. I decided to show Donna a church so we went into Santi Apostali (or something like that) If I understood correctly there were two dead apostles in the basement and that was fun to check out. There was a mass in one of the wings but only about 20 parishioners. I don't understand how this city can support all of the churches. Seems like there is at least one on every block and most of them are huge!

We did find Peroni's a little further down the street but it was on the wrong side (or my memory was backwards). Their menu is greatly expanded, but I wanted a pannino with prosciutto crudo and mozzarella to bring me back to those days of old. It wasn't on the menu but the waiter figured it out. He brought me a plate of prosciutto with three olives on it and a ball of mozzarella. I got a side of two pannini and a knife, I was then on my own to figure it out. It worked out to my satisfaction although I ended up with an extra paninno. 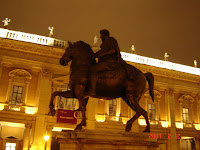 We had a great time trying to get across piazza Venetzia. Italian drivers haven't changed a bit. They still resent stopping for pedestrians and rarely do. They really don't want to kill a pedestrian and so it was back to playing the games of chicken from my childhood. I always kept Donna on the other side of me from the oncoming traffic and determinedly stepped out into the onrush of cars always ready to step back before they plowed into us. The cross walks make no difference at all, either way they don't want to stop but a percentage will avoid trying to kill you and so you calculate the odds and eventually get across the street. Anyway, we got across and climbed the Capitoline to see Marcus Aurelius and Michelangelo's piazza at night. It was glorious. From there, down the back side to see the forum at night, that got me kissed, something about it being so beautiful and so romantic, go figure.


We wandered down the back of the Capitoline and that put us just beyond the Teatro Marcello and the bus stop for the 628 was only just across the street. We scampered across and soon we were on our way back to Beatrice and Renzo’s apartment. 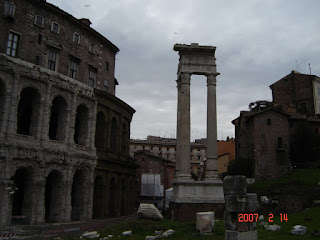