We return to Rome the following year... October, 2008 Day One 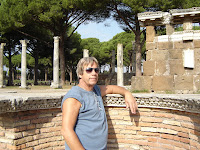 Preface, Before I left, I talked to Mahlon, he said that if I rented a car without a GPS, I would be screwed; see below….driving in Italy showed me how seriously challenging something can actually be… 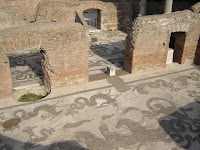 We arrive at the airport; there is no custom check whatsoever. So, we ask where the rental cars are, apparently, they are upstairs. Upstairs we are told that they are on the top floor, from there we are directed across the street to a parking garage. Inside the garage is a moving sidewalk, “follow the signs toward the Hilton” we are told, we travel from one moving sidewalk to the next and we arrive at a train station. Very cool, the train goes to the airport but the car rental is not here. I ask, they tell me to follow the moving sidewalks back the way I came. I want to argue, but my Italian escapes me so we return on the path we came. Turns out, the car rental was in one of those intersections behind the central post hidden from view as we came down the other way. Renting the car was easy, we got a Nissan Micra, a very small car but with four doors and larger then a ‘Smart’. 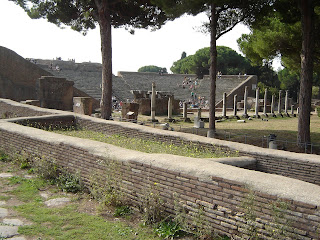 OK, so now we start the controlled destruction derby of driving in Italy. Remember, I never had driven here before. I obtained my driver’s license in the U.S. after graduating from high school. Well, it was a little harrowing and I soon learned the rule. Stop signs are just a suggestion, I’m not sure that I ever saw a car stop at one. It isn’t even like the ‘California stop’ where we role through the stop sign and intersections slowly. In this country they just don’t actually slow down at all as they go through the stop sign. OK, I can do that too. And if you put on your blinker to make a turn or change lanes, that is the same as challenging every vehicle within sight for that space. If a car doesn’t accelerate to close off the direction or lane you had intended to turn into, for sure at least one Vespa will. The goal is to get where you want to go without letting anyone crash into you. 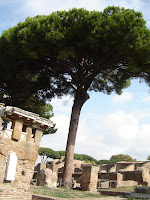 What they didn’t know was that I have driven in Tijuana in my F-350 4x4 truck on many occasions. I realize that the truck is a little larger than a ‘Micra’ but the concept is the same, never let them see the fear that is in your eyes. .. We decided to go to Ostia Antica first since it was right next to the airport. The place was very cool; I got lots of photos of mosaic floors and other things. We had lunch inside the ruins at the taverna dei Slavi. Is that the word for slaves? Turns out it was Scavi (excavations). Ostia was very interesting but perhaps only half excavated, it may take them another hundred years to get it finished, we shall see. 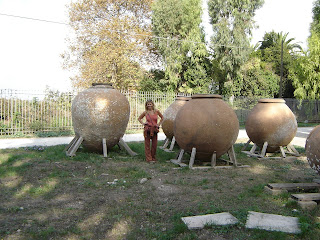 Anyway, I had printed out directions from Google for getting to the apartment on Via Siria. The directions were probably good but the problem is that in Italy, labeling roads is a fine art specifically designed to miss-guide you and assure that you never find the location that you set out to find. We got hopelessly lost looking for Via Christoforo Columbo which must be the largest road in Rome. Really, it wouldn’t have been complicated if I had known that C.C. runs from E.U.R. to the center of Rome, after all, I could see that building in E.U.R. with all of the arches. If I had headed toward that, I would have been in like Flint. As it was, we were lucky that we didn’t end up on A1 on our way to Florence. We did eventually in a very convoluted manner end up on C.C. and followed it toward downtown until it ended in the piazza in front of the Termi di Caracalla. I hesitated for a second and ended up taking a sharp right onto the adjacent street, it was spectacular, walls on either side and cobble underneath. Tourists were walking along this seemingly secluded road which was puzzling until I figured out that we were on the Via Appia Antica. Well, soon enough we were beyond the city and on our way to Brindisi and the road was one way only. We stopped in front of the catacombs of San Sebastiano to figure out how to get home. Go left, left again and floor it, pretty soon we were back at the walls of the City. We made a right, followed the walls and began navigating by dead reckoning. It just felt right; this got me to within two blocks of Via Siria which isn’t bad! For those of you who know Rome but are confused as to where we stayed, here is the simple way, go past San Giovanni in Laterano, through the Porta di San Giovanni in Laterano and follow up Via Magna Grecia, there is a name change and it becomes Britannia and then Via della Concordia as it enters Piazza Zama. Via Siria is just beyond. We finally arrive at Via Siria 23. Renzo had been worried and waiting for us. He soon took off to fix a parking ticket that had been paid but they wanted money again. Italian bureaucracy at work. 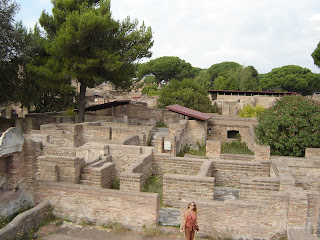 I proceeded to plug in my surge suppressor for the laptop designed to only work on 110v I think I killed it. I also blew out the electricity for the whole apartment. Everything works on electricity or has an electric spark igniter. Cold showers, quite invigorating! Search everywhere, can’t find the electrical panel. We go out searching for a phone to Call Beatrice, by the time we return, Renzo is back, he resets the breakers and tells me that it is a good thing I didn’t blow the main which is down by the entry gate to the complex. Had I done that, it would have required the Utility Company to re-activate and a number of days for them to show up.
Posted by Bryan Morse at 6:22 AM